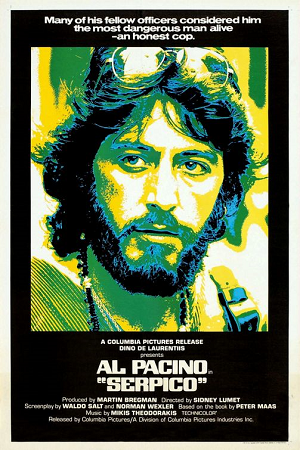 "It's my life you fuck!"
— Frank Serpico
Advertisement:

This 1973 film, directed by Sidney Lumet and produced by Dino De Laurentiis, was adapted from the non-fiction novel by Peter Maas.

Frank Serpico (Al Pacino) is an idealistic New York City Cop who dreams of becoming a detective. In order to qualify for the famous 'gold shield' he joins the Plainclothes Division, where Serpico's tendency to dress like a hippy — and refusal to take bribes — earn first the bewilderment, and later the active hostility, of his police colleagues. Equally disturbed by the corruption that surrounds him, Serpico keeps trying to inform his superiors of the situation, but all are reluctant to open a can of worms that could jeopardize their own careers and/or alienate their fellow officers. Eventually Serpico is forced to go public — an action that puts his life in danger from those who are sworn to serve and protect.

The Real Life Frank Serpico has said of Al Pacino's performance "Pacino played [me] better than I did."