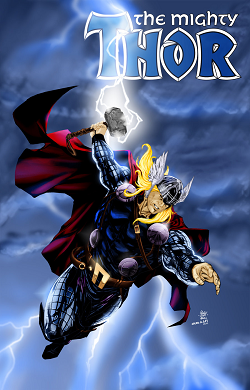 Much better than the regular Thor.
"Of all the descriptive names of all the things people say when they hear a hero in action, The Amazing Spider-Man, The Incredible Hulk, The Invincible Iron Man, the only descriptive word for this guy is 'The God-damn Batman!"
— SF Debris on The Dark Knight
Advertisement:

A Comic Book Naming Convention - sort of - with roots in the Silver Age. The superhero's name is preceded by some sort of silly, over-the-top adjective such as "The Egregious Trope-Man". Usually in the actual book's title even if rarely used in the story.

Keep in mind that not just any descriptors qualify for the trope — "New Trope-Man" is too simple, but "All-New, All-Different Trope-Man" can be sufficiently over-the-top. Now mostly used in the modern day either due to the Grandfather Clause or as a deliberate homage to the Silver Age. If the superhero gets a movie, expect the descriptor to be used at least once.

Comes from the same era as Something Person names and Superhero Sobriquets, and often is an Alliterative Name. Replace a team's name with the number of members, and you have The Notable Numeral. Also compare other name and title tropes involving adjectives, Adjective Noun Fred and The Magnificent. Contrast the Dark Age of Supernames. See also The Fantastic Trope of Wonderous Titles.