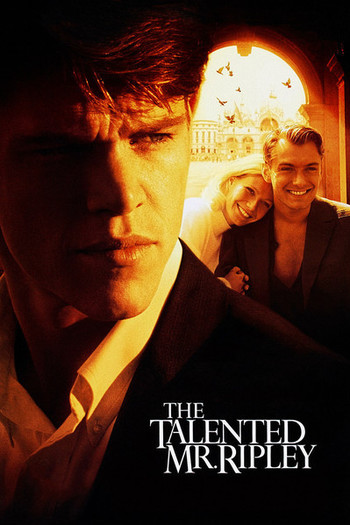 The Talented Mr. Ripley is a 1999 film directed by Anthony Minghella. It is an adaptation of the book of the same name, which is the first novel in Patricia Highsmith's Ripliad series. Tom Ripley (Matt Damon) is a young schemer in 1950s New York with talents for things like impersonating people and forging signatures. A rich businessman named Herbert Greenleaf hires Tom to go off to Europe to fetch home Herbert's wastrel son Dickie (Jude Law).

Tom tracks Dickie down in Italy where he's living the life of the idle rich with his pretty girlfriend Marge (Gwyneth Paltrow). Tom quickly forgets the whole idea of bringing Dickie back to America and instead starts hanging out with him, in a relationship that's less friendship and more like hero worship with a strong tinge of homoeroticism. However, Dickie's fellow blue blood rich guy friend Freddie Miles (Philip Seymour Hoffman) recognizes Tom for the lower-class hanger-on that he is, and holds him in contempt. Dickie begins to tire of Tom and his doglike devotion. A confrontation leads to a shocking act of violence, and then the story takes a turn.

Cate Blanchett appears as Meredith, a society lady that Tom strikes up a casual friendship with before he goes to Europe. Compare this film to Purple Noon, a 1960 French adaptation of the same book, with Alain Delon as Tom Ripley.