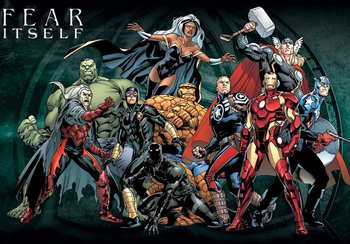 Do You Fear...
Advertisement:

The 2011 Crisis Crossover for Marvel Comics.

At some point during the Second World War, the Red Skull enacted an arcane ritual under the orders of Adolf Hitler, causing a mysterious artifact to fall from the heavens and crash land in Antarctica. Upon locating the artifact—a large hammer, supposedly tied to the Norse goddess Skadi—and learning that he is incapable of lifting it, the Skull has the Thule Society seal it away in a fortress and guard it with their lives. Fast forward to the present day, where his daughter Sin, believing the hammer to be her inheritance, comes to collect; and after killing the guards and getting her hands on the hammer, she proves capable of lifting it. Of course, as with any mystical weapon there is a catch to wielding it, and this hammer is no exception; for, as the runic inscription on its shaft states,

"And he who shall be worthy shall wield the power of Skadi."

As such, much like Donald Blake before her, Sin is transformed into the powerful Asgardian, Skadi. With the awesome power conferred by the hammer, Skadi sets out at the head of a large Nazi force to lead a blitzkrieg on the United States... but not before stopping off by the prison of a mysterious deity known only as the Serpent and busting him out, first. Setting the stage for a series of other hammers to fall all over the world with each its "Worthy" gaining awesome power and the order to spread fear around the globe.

Not to be confused with the Buffy the Vampire Slayer episode of the same name.

Fear Itself provides examples of: