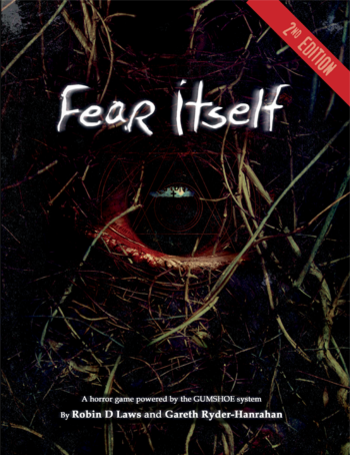 Fear Itself is a Tabletop RPG written by Robin Laws and published by Pelgrane Press in 2007, using the GUMSHOE system. A second edition of the game was released in 2016. Players take the role of everymen much like themselves, who are inexorably drawn into a confrontation with an alien, evil realm and end up caught in terrifying situations.

The supernatural threat in Fear Itself is the Outer Dark, a dimension of horror and suffering inhabited by ghastly Creatures of Unremitting Horror. The Outer Dark is separated from our reality by a thin and fraying Membrane, through which monsters and psychic effluvia seep. This background is shared by Fear Itself and The Esoterrorists, but while player characters in The Esoterorrists are competent operatives, supported by a well-resourced international organisation, those in Fear Itself are ordinary people, and are not pitted against the Esoterrorists (or are otherwise oblivious to its presence), but instead directly fight against the Outer Dark. Not all Fear Itself GMs have to use the Outer Dark mythology, but it's ideally suited for stories of grisly terror and urban decay. In either case, tropes related to the Outer Dark apply equally to both games. The Book of Unremitting Horror, which details entities of the Outer Dark, serves as a supplement for both games.