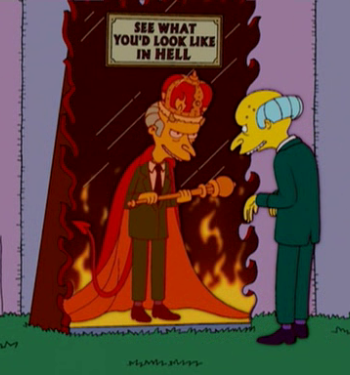 Excellent!
Black Mage: I'm dead, so this is some kind of egoscopic projection of myself?
Lord of Hell: Correct, but I hardly see what—
Black Mage: So without any fleshy meats to slow me down, how long do you really think it'll take me to usurp your entire kingdom?
[Beat]
Lord of Hell: I have the entire legions of Hell at my command.
Black Mage: Enjoy it while you can, skippy.
— 8-Bit Theater
Advertisement:

The typical fate of characters that enter Hell is a horrific one: tortured by demons for all eternity. That's not the case with this guy. He'd much rather be the demons' boss than their victim.

This trope is where a character is sent to wherever it is that evil people go when they die and decides to take over. Depending on the setting, it may be where everyone, good and bad, goes, but rest assured that this character will make himself king of them all. It takes an especially devious, powerful, and/or determined character to accomplish this given the heavy odds stacked against him.

After all, isn't the afterlife run by gods? These are beings of might and wisdom far above the souls that come in for torment. Did You Just Punch Out Cthulhu? often happens in these cases.

Ambition Is Evil will likely come into play. It's "better to reign in Hell than serve in Heaven", right? According to Milton, that's what Lucifer thought when he set up a kingdom down there. Likewise, that's likely motivating this particular character. It's possible that they believe they can do a better job of ruling Hell. Whether this means Eviler Than Thou or creating Ascended Demons, this trope overlaps with God Job. On the flip side, if they never intended to follow through on taking the Devil's job but are forced to anyway by metaphysical laws, they'll find out that Someone Has to Do It.

You Kill It, You Bought It and Klingon Promotion are related tropes; a character takes the position by killing the previous holder of the position. See also The Usurper and Kill the God. Compare To Hell with This Infernal Job, where the Devil voluntarily quits his job. May cause the character to be Barred from the Afterlife if he doesn't qualify for Heaven and the existing management of Hell is afraid to let him in.

It doesn't have to be the Judeo-Christian idea of the devil or hell to count. Any local equivalent will do. In other words, Crystal Dragon Devil.