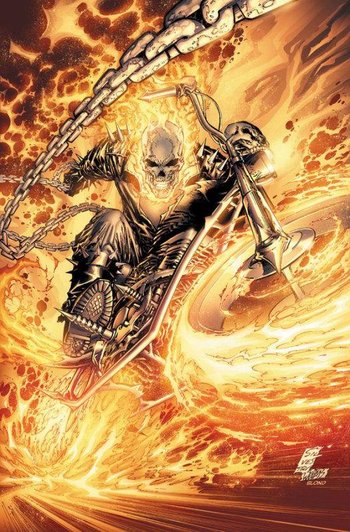 He's the good guy.
"Hell hath no fury like a flaming skeleton on a motorcycle."
— Ultimate Marvel vs. Capcom 3
Advertisement:

Ghost Rider is one of the earlier thriller heroes of the Marvel Universe, as in, heroes that deal with underworld baddies like demons and the likes of Mephisto. The premise is basically: Badass Biker with a Flaming Skull for a Head. There are two famous Ghost Riders in the universe that the audience knows.

The "first" Ghost Rider was a Western hero named Carter Slade. This character rode around on a white horse in an all-white getup. He was retroactively dubbed the Phantom Rider.

The first true Ghost Rider is Johnathon "Johnny" Blaze, who first appeared in Marvel Spotlight #5 (August, 1972). A stunt motorcyclist who trained under his dead father's friend Craig "Crash" Simpson. He also became the fiancee of Crash's daughter Roxanne. His mother was alive, as well, but she abandoned him, taking away his brother Daniel and sister Barbara. Due to the abandonment, Johnny tended to suppress the memory about them, so it would seem life would be good for him...

Until one event where Johnny slipped off on his motorcycle stunt training, costing the life of Crash's wife, a mother figure to Johnny. This caused Johnny to swear off motorcycling, and deteriorated his relationship with Crash as Johnny refused to take public stunts, preferring to train in the shadows. Then, Crash revealed that he had cancer, but even then Johnny still refused. Trying to find a way out of his impasse, Johnny turned to the occult and eventually learned of a spell that could summon Satan. That spell summoned Mephisto (though it has recently been retconned to be Lucifer who made the deal with Johnny), whom Johnny asked to cure Crash's cancer. Mephisto upheld his bargain and cured Crash... only to have him die in an accident during the very next stunt he performed.

Obviously, Mephisto demanded Johnny hold to his bargain and agree to become his slave... except Roxanne did a Big Damn Heroes and expelled Mephisto with The Power of Love. Unfortunately, Mephisto already bonded Johnny with the spirit of Zarathos, a vengeful demon (angel after the retcon) that he defeated in the past, turning him into the Ghost Rider. Both souls defied Mephisto, but eventually came to clash in who was to have control of the body. After much struggling, Johnny managed to seal the spirit of Zarathos and live in peace. For a short while, at least, until the next Ghost Rider appeared...

The second Ghost Rider is Daniel "Danny" Ketch, actually the brother of Johnny Blaze. He first appeared in Ghost Rider vol. 2 #1 (May, 1990). When attacked by thugs to protect his sister Barbara, a touch to a mysterious medallion doubling as a gas cap on what appeared to be a junked motorcycle suddenly bonded him with a spirit Kale, turning him into the new Ghost Rider. Johnny took note of this and eventually became Danny's Big Brother Mentor of sorts in his adventures.

It's eventually revealed that the Ghost Rider has quite another origin from what Johnny and Danny were told: the Spirits of Vengeance are black-ops agents for Heaven, and there have been multiple Spirits across the cultures of the world since Biblical times. Thanks to Zadkiel, though, there are now only two - Johnny and Danny.

In the 2011 series, Blaze gave up the mantle of the Ghost Rider, letting Alejandra Jones become the new host of the Spirit of Vengeance. He would go on to try to mentor Alejandra but, at the end of that series would retake the mantle of Ghost Rider back with Alejandra only retaining a portion of its power.

In March 2014, the All-New Ghost Rider series debuted. Featuring a new character, Robbie Reyes, taking on the eponymous mantle, Robbie uses a car instead of a motorcycle and lives in East Los Angeles. As opposed to mystical and demonic threats, Robbie's series largely focused on youth gang culture and living in the ghetto, though there were some mystical elements. Johnny Blaze eventually showed up in the series, inducting Robbie into the Ghost Rider family.

As part of the 2017 Marvel Legacy initiative, there was a Spirits of Vengeance miniseries, featuring a team of demonic heroes consisting of Johnny, Blade, Daimon Hellstrom and Satana.

For the 2018 Marvel: A Fresh Start initiative, Robbie was announced as a member of The Avengers.

As well, 2018 also saw the introduction of Cosmic Ghost Rider, a spin-off of a Thanos storyline earlier in the year, with a future version of Frank Castle who became the Rider who has gone mad, deciding to kill Thanos when he was a baby, only to realize that the kid isn't evil yet, so he decides to raise the kid himself, to, you know, not be a mass-murdering tyrant. Hilarity Ensues.

One of the more badass heroes of the Marvel 2099 setting was a deceased hacker, who got uploaded into a skeletal cybernetic body, with optional holographic flames. Ghost Rider 2099 was a moderate success, with a strong anti-authority message.

Ultimate Ghost Rider is also named Johnathon "Johnny" Blaze, but is here an ordinary guy with a love of biking who was biking across the country with his new fiancee-turned-wife, Alicia, when they ran into a group of fellow bikers in a bar. They seemed friendly enough; they were actually Satanists who murdered Johnny and his wife in a ritual Human Sacrifice to achieve great wealth, power and success in their life thereafter. (It worked; one of them is vice-president of America by the time Ultimate Ghost Rider appears). In Hell, Johnny barters his soul to Satan and is transformed into Ghost Rider, appearing on Earth and resurrecting his former wife to live a happy life without him in exchange for killing first the Satanists who killed him, then any other sufficiently evil soul he can find, all to help empower Satan's army.

Ghost Rider in other media:

In 2007, a film featuring Johnny Blaze was released with a composite version of the character played by Nicolas Cage. It received a sequel called Ghost Rider: Spirit of Vengeance.

After Marvel Studios regained the rights to the character, Robbie Reyes was introduced to the Marvel Cinematic Universe in 2016, played by Gabriel Luna in Season 4 of Agents of S.H.I.E.L.D.. Robbie's origin flashback in the series also features an unnamed biker Ghost Rider who's implied to be Johnny Blaze.

Ghost Rider provides the examples of: