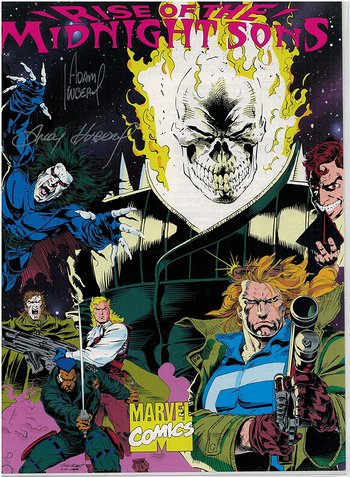 Yes, they do look Nineties-tastic.
Advertisement:

The Midnight Sons, also known as the the Mystic Nine, the Children of Midnight and the Order of the Midnight Sons, is a loose team of supernatural heroes and anti-heroes who occasionally have teamed up to defeat dark and demonic forces. They first appeared in Ghost Rider vol 3 #28 (August 1992) as part of a crossover called "Rise of the Midnight Sons." The crossover was between nearly all of the "Marvel Edge" books at the time, including Ghost Rider, Morbius, Nightstalkers, and Darkhold: Pages from the Book of Sins.

Ironically, their sole book, Midnight Sons Unlimited, wasn't even about the team — it was an anthology book featuring stories about the various characters when they weren't part of the team (aside from when the book was part of a crossover). The book ran from August 1993 to May 1995 and also crossed over with Doctor Strange, Marvel Comics Presents, Blade, and Blaze (a spin-off of Ghost Rider about Johnny Blaze without the Spirit of Vengeance).

Originally, the team consisted of Johnny Blaze, Danny Ketch, Morbius the Living Vampire, the Nightstalkers (Blade, Frank Drake, and Hannibal King), and the Darkhold Redeemers (Sam Buchanan, Victoria Montesi, Louise Hastings, and later Modred the Mystic and Jinx). Doctor Strange assembled the team, but wasn't a part of it until their last crossover, "Siege of Darkness."

After the cancellation of their book (and most of the "Marvel Edge" lineup), the Midnight Sons wouldn't appear again until Marvel Zombies 4 when Morbius assembled his own team of Midnight Sons consisting of himself, Daimon Hellstrom, Jennifer Kale, and Werewolf by Night, to fight against an alternate version of Simon Garth, the Zombie, and stop a zombie virus.

A video game based on the team, titled Midnight Suns, was released on Dec 2, 2022.