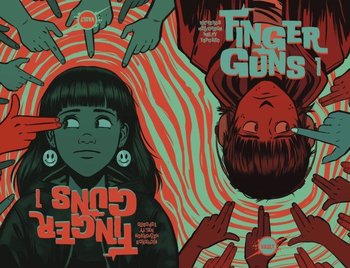 Finger Guns is a 2020 comic book series written by Justin Richards and illustrated by Val Halvorson with Rebecca Nalty on colors, and lettered by Taylor Esposito. It is published by Vault Comics.

Two teenagers, Wes and Sadie stumble upon a shared secret power: They have the ability to control people's emotions by pointing a Finger Gun at them. The two strike up a friendship and use their powers to help navigate through the intense peaks and banal valleys of teenager-hood.

The series ran for 5 issues, with the potential for more stories to be told in the future.