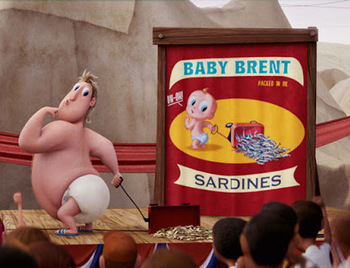 He’ll soon be 27 years old.
This is for when something was initially named, and that name made sense, but something about the object has has changed so that the name doesn't make sense anymore.
Advertisement:

Like the Chestnut and Elm streets of many United States cities. They had said trees when they were first named but now, they mostly don't, due to diseases wiping out said trees from the area.

Sister trope to Artifact Title, which is this, but for work titles, and this is a subtrope of Non-Indicative Name, which is for when any name not making sense, at least on its face.

One Extra Member is a subtrope, for groups initially named after its number of members, but gets more members and invalidates the name.

Non-Indicative Name is the Super-Trope for names that don't make sense. This trope is for cases of Language Drift or other kinds of change over time, changing things to a name that was accurate, now is not.

This can overlap with Non-Indicative Name in cases where somehow, inaccuracy is not caused by change over time, usually requiring two parts to a name, like if a "green dragon" has its color redefined as "blue" over time, but was initally named knowing that it's not "dragon"-y, such as in cases of Call a Smeerp a "Rabbit".