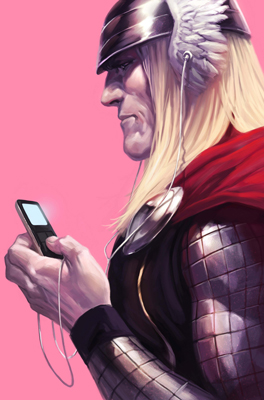 Maybe he's listening to Hammerfall.
Judge: [responding to an arrow shot] You're a fool! No weapon forged can harm me!
Buffy: That was then... [raises a rocket launcher] This is now.
— Buffy the Vampire Slayer
Advertisement:

If vampires can't safely go out in daylight, does sunscreen help them? What about just shining a flashlight at them with a UV bulb? What about the UV ray from moonlight? Given that Christianity was regarded as the one true faith in medieval Europe, it made sense that only crosses would affect them, but in a different region and time, how well would that weakness carry over? Would a cross work on a Taoist vampire? What could you use on a Muslim vampire when Islam is against the use of symbols for its faith? Would there even be any Muslim Vampires, considering that Islam forbids the drinking of blood? Is it the faith of the wielder that matters? Can a Jew fend off vampires with a Star of David? What about the fact that in addition to being haram, blood is also not kosher (i.e. treife)? Can Gordon Gekko fend them off with his wallet?note  Funnily enough, a similar event happened with a banker and a vampire in Vampire: The Masquerade

Note that this is not Magitek. Magitek is technology created with magic, like a camera which is really just a box with an Imp inside drawing really fast, or an "Internet" made from magic mirrors and living books. Post Modern Magik concerns itself with how non-magical technology interacts with magic, like when regular cameras aren't able to take pictures of vampires due to the use of silver halide photo-chemicals and mirrorsnote If the writer knows a bit more about camera technology, vampires might show up on digital cameras, but not the viewfinder of a high end camera, which uses a periscope arrangement of mirrors to show the image the actual lens sees, or the vampires may even show up in modern mirrors and/or photos since modern mirrors are commonly made with or from aluminum rather than silver, and demons are real, but can be beaten up by mutants or be fooled by realistic androids.