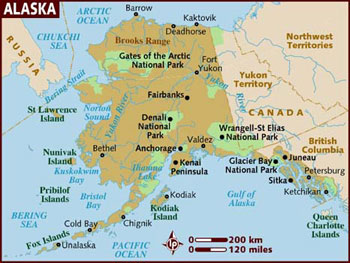 America's last true frontier, Alaska is, by a very wide margin, the largest of the 50 states. The next competitor for the title, Texas, is less than half its size. If it were overlaid over the contiguous 48 states

, then Anchorage, its largest city, would be in Missouri; Utqiaġvik (formerly, and sometimes still called, Barrow), its northernmost town, would be in Minnesota; Ketchikan, its southernmost, would be in Florida; Nome would be in South Dakota; Juneau, the state capital, would be in Georgia; and the Aleutian Islands would stretch all the way into California. Bottom line: Alaska is huge.

But Alaska is also very sparsely populated. As of the 2020 census, there were just over 730,000 human beings living in Alaska, making the state the third least-populated in the nation, outranking only Vermont and Wyoming. And this comes after a huge population surge in the 2000s (many migrants coming in from California, Oregon, and Washington for economic opportunities) — in the 2000 and 1990 censuses, Alaska was firmly the second-smallest state by population, just barely ahead of Wyoming. More than half of those people live in only one tiny corner of the state: the Anchorage metropolitan area, with about 40% of the population living in Anchorage itself. The state has, by far, the lowest population density in the country (less than one-fourth that of Wyoming, the state with the second-lowest population density). Part of this likely has to do with the fact that most of Alaska is either frozen tundra or forbidding mountains, something of an American version of Siberia, with only the coastal regions in the south being really hospitable.note Although in the future, Global Warming may push the line between "Cold" and "Oh-god-this-is-fuckin'-freezing!" further north, making the state more welcoming to new arrivals. The lowest temperature ever recorded in the U.S., –80° Fahrenheit (–62° Celsius), was taken in Prospect Creek, Alaska, on January 23, 1975.

Alaska was the first place in the Americas that human beings laid eyes on, as the last ice age lowered sea levels enough so that a land bridge, known as Beringia, formed between Alaska and Siberia.note The remnants of this bridge are the Bering Sea Islands of St. Lawrence, Nunivak, and the Diomedes. The people who crossed Beringia are the ancestors of all the aboriginal tribes of North and South America, from the Iroquois and the Sioux to the Aztecs and the Inca. Some of them, of course, stayed in Alaska. The peoples who settled along the state's long coastline lived off the ample supplies of fish and marine mammals; those in the interior lived off the equally ample supplies of freshwater fish and large land mammals. Collectively, they are known as the Alaska Natives, a group that encompasses the Tlingit, the Haida, the Tsimshian, the Aleut, the Yup'ik, the Alutiiq, the Gwich'in, and the Iñupiat.

The first Europeans to lay eyes on Alaska were the Russians in 1741, who colonized it for the same reason that everybody else in Europe wanted a piece of the Americas: getting rich. Specifically, the Russians were there for the fur trade, and claimed an area that includes much of the Pacific Northwest. As the U.S. and Canada expanded west, the Russian claims were pushed back to the present-day area of Alaska. The colony was never very profitable for Russia, and was increasingly under pressure from Canada and its British protectors, so when the Americans came knocking at their door in 1867 asking to buy it from them for the cool sum of $7.2 million,note Somewhere between 150 and 200 million in 2021 dollars the Russians were happy to oblige. The purchase of Alaska was highly controversial initially, with many people calling it "Seward's Folly" or "Seward's Icebox" (after Secretary of State William H. Seward, the man who organized the purchase) and viewing it as a worthless wasteland that America would find no better use for than Russia did.

In time, however, America would soon realize just what a great deal it had gotten. Some 30 years after the purchase, a series of gold rushes in both Alaska and, more importantly, in the neighboring Yukon Territory of Canada,note Despite most of the gold being in Canadian territory, the easiest way to get there was by boat, followed by a relatively short overland trek; this meant the majority of prospectors had to start in Alaska, and it made Skagway into a boom town. turned the area into The Wild West ON ICE, allowing it to gain enough people to be incorporated as a territory in 1912. After that, the Aleutian Islands were the site of the Aleutian Islands Campaign during World War II (and the only part of the United States to be invaded during the war). Known as the "Forgotten Campaign", because it was overshadowed by the simultaneous Battle of Guadalcanal, this chapter of WWII made up in bloodshed what it lacked in significance; After a gruelling and savage winter war that rivalled even the Eastern Front in brutality, the Japanese ended it all with an unexpected mass Banzai charge, one of the largest in the Pacific, which split the American lines into pieces and resulted in a day-long hand-to-hand melee until the 29 Japanese survivors finally surrendered.

Alaska's true value, however, was completely unforeseeable to the 19th-century Americans, and only became obvious in the late 1940s: Ladies and gentlemen, imagine Soviet Alaska. The West really dodged a bullet on that one, no? Anyway, with the onset of the Cold War, Alaska became the cornerstone of America's defense against Soviet bombers. The two wars, and the resulting military investment, caused a population surge in Alaska, allowing it to be inaugurated as the 49th state in 1959, followed by Hawaiʻi a few months later.note Fact: the reason the two states weren't admitted at the same time is apparently because, since the U.S. flag can only be officially changed on July 4, flag-makers wanted to be able to have one year of selling 49-star flags — thus Alaska was admitted before the 4th and Hawaii after.note If only it had been admitted before New Mexico and Arizona. Then it could have been called "AK-47!"

The two moments that defined Alaska's modern existence were the discovery of oil in Prudhoe Bay in 1968 and the completion of the Alaskan Pipeline in 1977 to bring that oil to the rest of the country. Oil money transformed Alaska from a backwater to one of the richest states in America, and the state has set up a permanent fund to invest some of its oil revenue for the benefit of the people. Every Alaskan receives a dividend (of varying amounts — in 2011, $1281; in 2012, $878), meaning that a family of four has a guaranteed welfare check of about $5,000... which just about makes up for the substantially higher cost of living. While it's gotten better in Anchorage and, to a lesser extent, Fairbanks, prices for basic goods are still ridiculously expensive in most of the state, due to the isolation of many towns and the harsh conditions making freight transport quite difficult.

And now, for the part you've been waiting for: Sarah Palin. Yes, she spent a little more than two years as the governor of this state. She attempted to make a political comeback in 2022 by running for (1) the few months remaining in the congressional term of the state's only member of the House of Representatives, who died that March and (2) a full House term later that year, but ultimately ended up losing both races to Democratic candidate Mary Peltola. The other Palin (no, not the former governor's now ex-husband) has also been here. His travelogue series about voyaging all around the Pacific Rim nations featured a visit to Alaska, where at one point he really could see Russia from the part of Alaska he was standing in. So one Palin really did manage it — but it wasn't Sarah.