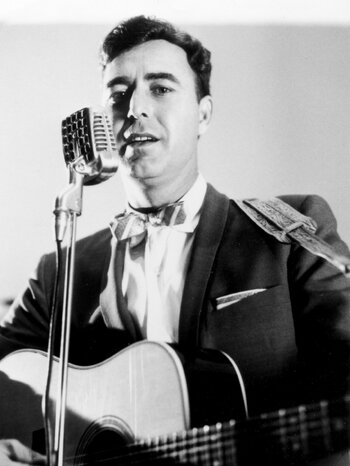 John LaGale "Johnny" Horton (April 30, 1925 – November 5, 1960) was an American country music and rockabilly singer-songwriter, most famous for his cover of the song "The Battle of New Orleans", which won a Grammy Award in 1959 and was widely parodied.

Johnny Horton was born in Los Angeles and raised in Texas, often traveling to California with his family as itinerant fruit-pickers. After several jobs in California, he went to Alaska to look for gold; while there, he began writing songs. Upon his return to the lower 48, he entered and won a talent contest in Henderson, Texas, and decided to return to Los Angeles to try his luck in the music industry.

He worked on a local radio station in Pasadena while recording his first few songs, then moved to Louisiana to perform more regularly on the radio show Louisiana Hayride. He signed his first recording contract, with Mercury Records, and he and his backing band began recording for them as "The Singing Fisherman and the Rowley Trio".

His first efforts didn't end up succeeding, and when the contract expired, he began working in a tackle shop. However, a new manager got him a contract with Columbia Records, and he went up to Nashville to begin recording, taking many cues from Elvis Presley and shifting from country into more rockabilly music.

He had his first hit with "Honky-Tonk Man", which peaked at #9 on the country charts in 1956. He continued recording, releasing two albums, along with several minor hits, but he had back-to-back #1 country hits in 1959 with "When It's Springtime In Alaska (It's Forty Below)" and "The Battle of New Orleans", which was part of an album of historically-themed songs called Johnny Horton Makes History. "Battle of New Orleans" reached #1 on the Billboard Pop Charts as well, was the #1 song of the year, and was awarded the Grammy Award for Best Country & Western Performance.

Sadly, in 1960, just after his third #1 hit ("North to Alaska", the theme song of the John Wayne movie of the same name), he was killed when the car he was riding in got into a head-on collision. Several albums of collected singles and unreleased tracks were made, including a "Greatest Hits" album that went platinum in 1961.

Several of his songs have been covered, including a cover of "When It's Springtime in Alaska (It's Forty Below)" by his close friend Johnny Cash and "Honky-Tonk Man" which was Dwight Yoakam's debut single.

His recording of "The Battle of New Orleans" was inducted into the Grammy Hall of Fame in 2002.