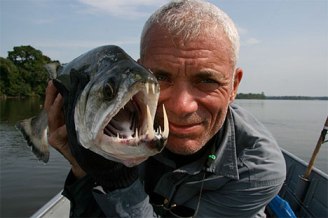 ...and you thought sharks were scary.
Advertisement:

River Monsters is an Animal Planet series hosted by Jeremy Wade, a British biologist/extreme angler/writer/TV presenter/specialist in natural history, and produced by Bristol's Icon Films. The series began in April 2009 to the best series premiere in Animal Planet's history, most likely because it features a man looking for monstrous freshwater fish. It is an extremely potent dose of Nightmare Fuel due to that last part.