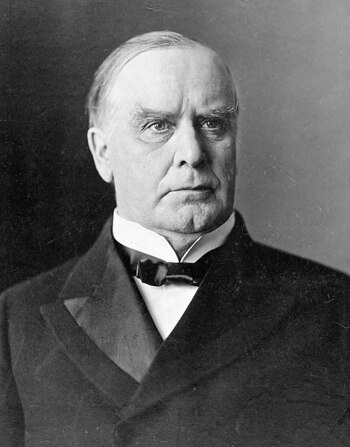 "Doesn't our President look marvelous today? So round and prosperous!"
— Assassins, "The Ballad of Czolgosz"
Advertisement:

William McKinley Jr. (January 29, 1843 – September 14, 1901) was the 25th President of the United States, serving from 1897 until his death in 1901. He was the seventh president from the Republican Party, followed Grover Cleveland's second term, and was followed by none other than Theodore Roosevelt.

McKinley was phenomenally popular during his time. A former lawyer, political operator, congressman, and governor of Ohio, he gained the presidency mostly by running a "front porch campaign", giving his speeches and addressing his supporters from his own house in Canton, Ohio. He ran mostly on a platform of protecting the economy with high tariffs; he had been chairman of the congressional committee which had drafted the "McKinley Tariff" of 1890, under which the average duty on imported goods rose to almost 50%. He also advocated keeping the gold standard at a time when his Democratic opponent, William Jennings Bryan, was promoting the free coining of silver (and little else — though stylistically, he campaigned by crossing the country, also a marked contrast from McKinley). When that issue failed to excite the nation, McKinley won the election by a small margin in the popular vote and a considerably larger margin in the Electoral College. Having inherited a depression from predecessor Cleveland, the economy significantly rebounded during McKinley's time (in part due to the Spanish-American War), with unemployment dropping by over 10% during his first term. The dollar was placed entirely on the gold standard, tariff rates were increased, and relations with labor unions improved significantly.

The Spanish-American War broke out during his first term in 1898, mostly over the issue of independence for Cuba. The American victory was quick and decisive: both the Army and Navy won nearly every engagement with the Spanish. Ironically, McKinley tried to avoid war for a long time despite public opinion favoring the Cubans, but he accepted war when it was clear that diplomacy was no longer an option (and Congress essentially forced his hand; after all, Congress declares war, not the president). When the dust had settled, Spain had ceded Puerto Rico, Guam, and the Philippines to direct American control (though the residents of the Phillippines spent the next four years fighting a violent guerrilla war against the Americans), while Cuba was granted independence but remained firmly in the American sphere of influence. At the same time, the formerly independent nation of Hawai'i was annexed after local American plantation owners overthrew the Hawaiian monarchy, further expanding American influence in the Pacific.

McKinley also sent 2,500 troops to join the eight-power coalition (the Americans fought alongside Russia, Japan, Germany, Britain, France, Austria—Hungary, and Italy) in suppressing the xenophobic 'Boxer' rebels in China. As You Know, this ended with the looting and razing of Beijing and the (sexual) assault of many of its inhabitants, fueling further xenophobia and sowing the seeds of specifically anti-American sentiment among the country's elites (who actually knew the differences between the barbarian nations). McKinley joined the coalition to prevent the USA's embassy staff in Beijing from being killed, to prevent the Qing Empire from taxing foreign companies or raising taxes on foreign imports (tariffs) above the 2% which the Eight Powers had forced them to agree to, and to prevent any of the other seven powers from formally annexing any territories. McKinley avoided annexations in China and opposed them by others because the Philippines debacle had soured the US public on formal empire, and US nationalists and anti-Imperialists alike agreed that other countries expanding their empires was bad. This pursuit of a highly unequal trade and diplomatic relationship with the Qing Empire and opposition to annexations was termed "the Open Door Policy". In upholding it, the USA both helped to spark and shaped the peace after the First Sino-Japanese War of 1895 and Russo-Japanese War of 1904–5.

This combination of strong economy, territorial gain, and success on the international stage buttressed his case, in the minds of the public, for why he should have won a second term in 1900. Although he defeated Bryan by larger popular and electoral margins than in their previous contest, McKinley barely got a chance to enjoy his second term. He was the last veteran of The American Civil War to be president (serving alongside fellow Ohioan president Rutherford B. Hayes) and was also the first president to be elected during an Olympic year (the year of the first modern games, 1896), to ride in an automobile, and to campaign by telephone. His face was on the $500 bill, but these have been discontinued since 1969. His two elections saw voter turnout above 70% each time, the last time voter turnout was above the 70% mark.

In person, he was known as a kind and well-meaning man — after he was shot, he literally begged the people at the exposition not to form a mob and attack his assassin, and to break the news gently to his wife. McKinley went on national speaking tours in order to stay in touch with voters and held regular press meetings. His wife, Ida, developed epilepsy after both of her daughters died as toddlers. He kept her by his side at all times in case she had a seizure.

The worst natural disaster in American history, the 1900 Galveston hurricane

, happened on his watch. Over 8,000 people in Texas lost their lives to an incredibly destructive hurricane.

McKinley was shot by Leon Czolgosz on September 6, 1901 and died of his wounds which became gangrenous eight days later, making him one of the more famous victims of violence perpetrated in the name of anarchism; a few short but eventful decades later, the radicals to be really afraid of would be communists instead. He famously disliked having a security detail, seeing them as an impediment to interacting with his constituents, and was specifically warned that the event in which he was shot would be impossible to secure properly. McKinley was unconcerned because he couldn't imagine that anyone would actually want to hurt him. Much like James Garfield before him, technology was very near McKinley that probably would have saved him, but several decisions surrounding the operation didn't work out for keeping him alive (the new "X-ray machine" being exhibited at the very expo where he was shot was too untested for doctors to trust it, and apparently they didn't think to do the surgery under the brand-new electric lighting, nor could they use candles because flammable ether was still the best anesthetic available at the time). Nine days later, Czolgosz's trial began; it lasted eight hours, and after half an hour of deliberation, Czolgosz was found guilty and sentenced to death by the electric chair. After Czolgosz got executed, his remains were destroyed with acid. Less than six years after her husband's death, Ida Saxton was fatally heartbroken.

The lack of security afforded to American presidents—which was condemned by newspaper editorials across the country, led to an informal request from Congress asking the Secret Service—Treasury Department police, until then mostly concerned with fighting counterfeiting but doing other stuff on the side—with providing security for the President and other high-ranking officials. The Theodore Roosevelt administration quickly made this arrangement permanent.

Most historians consider McKinley to be an above-average president. While he was initially considered to be Weak-Willed and easily influenced by the public, there is a growing opinion in the historical community that his leadership successfully helped the United States enter the international stage, for all the good and bad that implies. He presided over the country's taking of its first non-continental territories while restraining European countries when they were on the verge of trying to take parts of China as colonies. Additionally, America recovered from a stinging depression and prosperity resumed. He also set the stage for the Republicans dominating the White House for the next few decades, making him easily one of the most effective presidents as a party leader. On the other hand, he is often criticized for annexing Hawaii and for his administration's actions in the Philippines. While largely forgotten by Americans today, it is very much not in the Philippines. The conflict in many ways paralleled the later Vietnam War in its lethality (over 200,000 Filipinos, most of them civilians, died along with 5,000 Americans) and the lasting anti-American feeling it generated both abroad and at home among peace activists.

He got a massive mountain in Alaska named after him, though the Koyukon people who live nearby had something to say about that. It was officially returned to its original name Denali by the Obama administration in 2015, nearly two years short of a whole century after the naming of "Mount McKinley".

McKinley is the most recent President with no direct descendants living today, since neither of his daughters survived to adulthood.