Useful Notes / The Other Rainforest 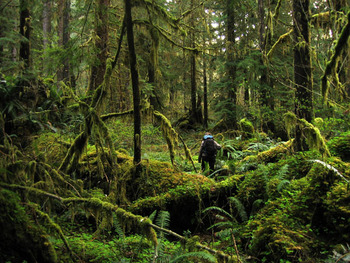 The Pacific Northwest of the United States and Canada. When people talk about the Rainforest, they invariably mean the tropical one in Brazil, but the Pacific temperate rainforest is actually the largest in the world by area, and it stretches from northern California upwards to Alaska. There are also American tropical rainforests in Hawaii and Puerto Rico (and the Philippines, when they used to be under U.S. colonial rule).

This portion of the Hollywood Atlas is home to magnificent forest scenery, Vancouver, mountain lions, Bigfoot, log cabins, lumberjacks, and Magical Native Americans delivering Green Aesops. Oh, and Crazy Survivalists who hole up in shacks, write manifestos, and send letter bombs. Also expect to see a New-Age Retro Hippie or two. Alternatively, we may get a beautifully-forested small town, which often turns out to be a City of Adventure for the local Kid Heroes when they're not being subjected to a Horrible Camping Trip. (Note the "rain" part of "rainforest".) This area may also be a Wild Wilderness with very little contact with the outside world, because the only city in this region Hollywood seems to know about is Seattle, home of the Space Needle and Starbucks.

As home to Microsoft and its founder Bill Gates, and Amazon (the non-tropical one) and its founder Jeff Bezos, and with Nintendo of America down the block and to the left, the Seattle area is the "cool" alternative location for tech people. Occasional recognition is given to Boeing. If Oregon ever gets a city, it will be Portland, which is often stereotyped as being populated by hipsters and Granola Girls. Funny thing is, despite Seattle being known as a tech city, Portland is a major center for computer manufacturing, with many Silicon Valley companies such as Intel having moved their manufacturing north due to cheaper utilities, wages, and land prices. Another notable company in the area is Nike, whose world campus is in Beaverton, a suburb just west of Portland.

Whenever something is supposedly set in Washington, you can almost guarantee it is Vancouver Doubling. However, due to good union contracts it's becoming more common for it to be doubled in Oregon. This may change in the next few years, however, as Washington has recently passed tax breaks and other incentives for filmmakers, as well as the Canadian and American exchange rates and labor laws making the States an equally valid choice.

Also, beyond the Cascade Mountains, vast stretches of central and eastern Oregon, Washington, and British Columbia are not in any way a rainforest (and the residents tend to be far more conservative politically.) Much of eastern Oregon is desert or semi-arid, described by some as "the closest you can get to the Wild West and still have cable", while eastern Washington is largely rolling plains similar to those in Idaho and the Midwest. The latter area is home to the majority of America's apple production, as well as the Grand Coulee Dam on the Columbia River, the largest dam in the United States (and at one point the largest dam in the world). Eastern Washington is home to the state's second-largest city, Spokane, whose suburb of Mead is home to Cyan, the developers behind Myst. Plutonium for the U.S. nuclear arsenal is produced on the Hanford Reservation (rather than Oak Ridge, Tennessee or Los Alamos, New Mexico). Eastern BC includes the Okanagan Valley, a major orchard and winery region, as well as a few different mountain ranges.

This region in fiction: