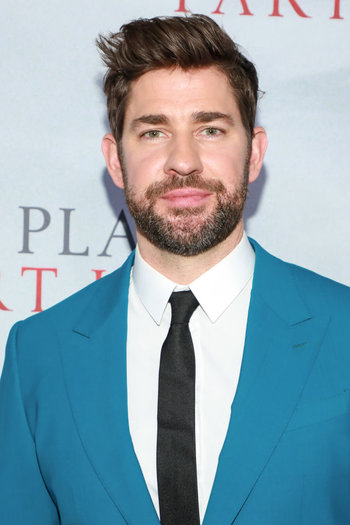 Looks into the camera like he's on The Office
Advertisement:

Getting his start in show business interning at Late Night with Conan O'Brien, he's perhaps best known for playing Jim Halpert (the American counterpart to Martin Freeman's Tim Canterbury) on The Office for nine seasons.

While on The Office, Krasinski began making a name for himself in films like Leatherheads, Away We Go, and Aloha. He's also written and directed himself in movies, including an adaptation of David Foster Wallace's Brief Interviews With Hideous Men, Promised Land, and the horror film A Quiet Place.

Despite gaining a reputation for portraying the comic relief in projects for a large part of professional career, Krasinski saw a noticeable transition towards serious drama and action roles during The New '10s, appearing in works like 13 Hours: The Secret Soldiers of Benghazi and A Quiet Place. He also executive produced 2016's Manchester by the Sea, which was derived from a story by himself and frequent collaborator Matt Damon; he was originally attached to star in the film as well (presumably in the Casey Affleck role) but pulled out before pre-production began.

In 2018, he became the latest actor to portray the popular Tom Clancy character Jack Ryan on his eponymous Amazon series of the same name.

Krasinski's voice is also fairly distinctive and recognizable, having done voiceover work in projects such as Monsters University and The Wind Rises. He's also done television ads for businesses like Esurance. Outside of acting, Krasinski has served as a producer for various film and television projects (many of which starring himself) as well as the game show Lip Sync Battle, which he co-created with Stephen Merchant. Adapting the recurring segment of the same name on The Tonight Show Starring Jimmy Fallon, the format has since been translated to seventeen (and counting) regions outside the United States.

His personal life is pretty A-List; George Clooney, Meryl Streep, Jimmy Kimmel, Jason Segel, and Matt Damon are just a few of his close friends, and have all worked with him in some capacity. He's been married to actress Emily Blunt since 2010, with whom he has two daughters, and actor Stanley Tucci is his brother-in-law (through marriage note specifically, Blunt's sister).

As actor and filmmaker