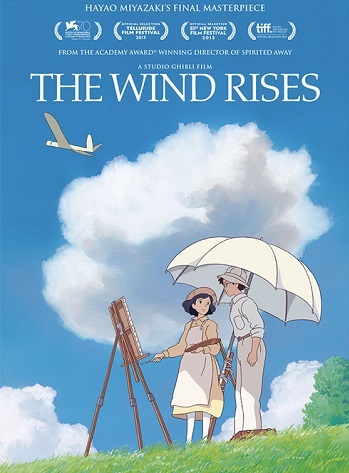 ...We must endeavour to live.
"Would you like to live in a world with or without pyramids?"
— Count Caproni
Advertisement:

The Wind Rises (Kaze Tachinu) is a 2013 animated film from Hayao Miyazaki of Studio Ghibli. Said to be his last film until he announced that he would be working on another that will be his last, it is a highly fictionalised biography of Jiro Horikoshi,

a gifted aeronautics engineer who is famous for being the chief designer of many war planes used by the Japanese military, most notably the (in)famous Mitsubishi A6M "Zero"

The story opens on Jiro Horikoshi (voiced by Hideaki Anno in Japanese, Joseph Gordon-Levitt in English) as a young boy in rural Japan. His acute myopia makes it impossible for him to be a pilot. Inspired by a dream featuring Caproni,

a famed Italian aeronautic engineer, he resolves to become a designer of airplanes — despite a prophetic warning from Caproni that such machines could be put to evil uses.

The film follows Jiro around the world and across the years in his life-long quest. He becomes an engineering student remarkable for his insight and his love of the art, which in this time period (c. 1925-1940) was in its infancy. Caught in the middle of a train trip by the Great Kanto Earthquake,

he has a chance encounter with Naoko, the daughter of a wealthy family, and helps the girl and her maid find their way home before traveling on to the university... where he must promptly join the effort to keep it from burning down in the wake of the earthquake.

After his graduation, Jiro and his friend and fellow engineer Honjo are hired by Mitsubishi Heavy Industries

and sent to their aviation division in Nagoya. He struggles against the massive technology gap that separates Japan from America and the European nations, and in time is sent to their ally Germany to learn from their foremost aeronautical engineer, Count Junkers. Eventually he returns to Japan as a senior engineer at the company, still working on the airplane he can see in his dreams.

His company is struggling to gain a military contract in the midst of a stagnant economy, and they pin their hopes on Jiro's newest project. In the midst of this crisis he is reunited with Naoko, and learns that she has contracted tuberculosis and doesn't expect to live much longer. They beg for her father's permission for a hurried marriage and she joins him in Kyoto, despite the risks to her health. In the end, he completes the design he'd been dreaming of for years, but the test-flight that should be the greatest moment of his life is marred by tragedy.

In a Distant Epilogue, Jiro walks through the wreckage of his creations — destroyed by war, or dismantled by the terms of the treaty that ended it — and dreams again of meeting Caproni, who asks him, "Was it worth it?"

The Wind Rises was the final Ghibli film released by Disney in North America prior to GKIDS buying out the film license, and brought the North American distribution partnership between Disney and Ghibli to a close after nineteen years 1 although Disney's Japan division still continues to release subsequent Ghibli films on home media in Japan..

The Wind Rises provides examples of: