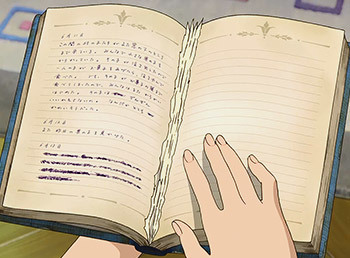 A Secret Diary with pages ripped out. Damn you, creators!
"Why did it go on for this long, and this far?" said [CIA Director Porter Goss] in a press conference called shortly after the report's release. "I'm as frustrated as anyone. You can't read a single thing that's been highlighted. Had I been there to advise [former CIA director] Allen Dulles, I would have suggested the traditional yellow color—or pink."
— The Onion: "CIA Realizes It's Been Using Black Highlighters All These Years"
Advertisement:

Scrapbook Stories, Epistolary Novels and other works of the kind which make heavy use of Fictional Documents will almost inevitably run into the problem of how to avoid the document giving away plot twists prematurely or referring to a particular character by name. Supposing the novel in question is a Cosmic Horror Story and the document refers to Things Man Was Not Meant To Know, or Brown Notes which supposedly cause the reader to Go Mad from the Revelation. Obviously, few writers are skilled enough to actually compose such a Brown Note, so including the Brown Note in the text of the Fictional Document itself is out of the question. But the writer still needs to use the document to get vital plot information across. So how does the writer get out of this quandary? Simple! Have the pivotal parts obscured.

Convenient ways to avoid a document giving away too much information are:

Commonly found (of course) in works which make use of Fictional Documents. Can be justified via the Literary Agent Hypothesis. Sister Trope to His Name Is.... Plot-Based Voice Cancellation achieves the same effect, but with sound, while Plot-Based Photograph Obfuscation does it with photographs. Censor Box is probably the closest equivalent in visual media. Compare to That Was the Last Entry and Apocalyptic Log. Subtrope of Impeded Communication.

Loser was interrupted in reading Donut's diary, first from Four grabbing the jawbreaker he's in, and then from reading the end.

Loser was interrupted in reading Donut's diary, first from Four grabbing the jawbreaker he's in, and then from reading the end.