Comic Book / When the Wind Blows 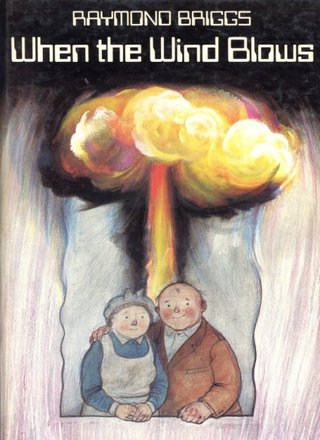 I dread to think of when, when the wind blows...
"The powers that be will get to us in the end."
— Jim Bloggs
Advertisement:

When the Wind Blows is a 1982 comic book and 1986 animated film written by Raymond Briggs. There was also a BBC Radio adaptation of the original comic. It concerns the Bloggses, a mildly dim but cheerful elderly English couple, and their preparations for an imminent nuclear war. This war commences mid-story, and the focus switches on their efforts at keeping a stiff upper lip while waiting for help, all the while succumbing to radiation sickness.

A classic weapon of the anti-nuclear weapon movement, When The Wind Blows uses its bright colours, eccentric characters and art style similar to Briggs's classic children's story The Snowman to hammer home the horrors of nuclear war, and make dark satire about government leaflets advising how best to survive a nuclear attack. Naturally, its child-like style in both art and the characters' personalities make it one of the more famous examples to come from the Animation Age Ghetto.

Inspired a song of the same name by Eric Bogle.

Compare to The Day After and Threads, and the Japanese Barefoot Gen and Grave of the Fireflies.

Not to be confused with the novel by James Patterson.

When the Wind Blows provides examples of:

Tropes specific to the animated film include:

Alternative Title(s): When The Wind Blows