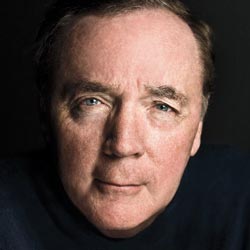 James Brendan Patterson (born March 22, 1947) is a prolific American thriller writer. By "prolific", we mean he releases about one novel per month

, and in 2016 he's launching a brand of novellas. Patterson's work is partly known for really short chapters, which were designed to keep the plot moving. Patterson was originally a lesser-known, yet award-winning novelist until he decided to shorten the chapters and focus-test his books. Upon making those changes, he suddenly hit fame.

As for Patterson's prolific output, he pulls this off by maintaining a stable of co-writers to help churn out new installments for some of his franchises. Patterson writes a treatment of 60 to 80 pages

containing all the key plot points, and then hands it off to his co-author to flesh out the details, periodically reviewing and providing feedback. This practice is often criticized in literary circles, but Patterson points out that collaboration is common in practically all media. It also doesn't hurt that he donates millions of dollars

to school libraries and indie bookshops.

Advertisement:
Works
His main series of novels are:

Works by this author with their own pages:

Other works by this author provide examples of: