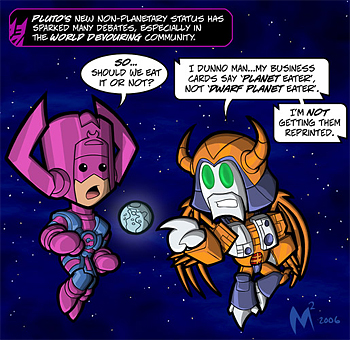 …and while they were arguing, the Borg came and ate it.
"What is this, a model of Pluto? That planet doesn't even exist anymore, you moron!"
— Dr. Doofenshmirtz, Phineas and Ferb
Advertisement:

Pluto has become the Butt-Monkey of the solar system, and not just because it's named for the Butt-Monkey of the Greek-Roman pantheon of gods. Want to get someone's attention? Show that things are serious? That a villain can put his money where his mouth is? Screw the status quo! This time, change is happening, and it's something big! Something cosmic! Something on a large-scale level that would shock the world if it happened in Real Life! A change that will alter the universe! ...er, well, at least the galaxy... The solar system?

What do you mean Reed Richards Is Useless? What can we alter about the universe that would be a big deal without being a big deal? It's not like we can blow up a planet...

Wait! What about one of those planets floating around the edge of the solar system? That insignificant, dark, icy one with one giant and four minuscule satellites — no one will miss that. It wasn't even important enough to be called a real planet. What was its name again?

Never mind. Let's blow it up!

The reason Pluto was downgraded from a planetnote A word which, prior to 2006, had no formal definition to a dwarf planet is based on the 2006 formalization of the definition.

note Which itself sparked a lot of still-ongoing controversy and criticism, both within and outside the astronomical community, for several reasons that include and go beyond Pluto's reclassification. To qualify, an astronomical body has to have four characteristics:

When the definition was finalized, it was quickly found that Pluto fails the fourth criterion, as it is very similar in size, composition, and orbit to hundreds of other objects in a region of space called the Kuiper Belt. Ironically, Pluto is still one of the most valuable objects for exploration, since it's the closest Kuiper Belt object and can provide science with information about the solar system's formation. So much so, New Horizons

(which was launched in January 2006, seven months before the IAU worked its magic) flew past the planetoid in July 2015.

after the discoverer of Pluto, Clyde Tombaugh making it an internet sensation and possibly the most adorable (dwarf) planet ever. Indeed other images from the same spacecraft

have shown Pluto is far from being a dead world covered with craters, instead having large — for its size — mountains, what seem to be dunes, and complex surface features that show (at least past) geological activity.note Not to mention both it

and its largest moon, Charon

, may become geek's paradises if the IAU has no problems with those names.

See also Throwaway Country. Not to be confused with Mickey's dog. We hope.

For the Roman God Pluto being a butt-monkey, that may be either Death Is a Loser or Everybody Hates Hades.

On the other hand, one might be inclined to wonder how it relates to the death of Meio Setsuna...

Compare Insignificant Little Blue Planet for the self-inflicted version, and Uranus Is Showing for another planet that's... a different kind of Butt-Monkey.

Milleous destroys the dwarf planet Pluto to serve as a warning as what will happen to earth if his daughter is not returned.

Milleous destroys the dwarf planet Pluto to serve as a warning as what will happen to earth if his daughter is not returned.