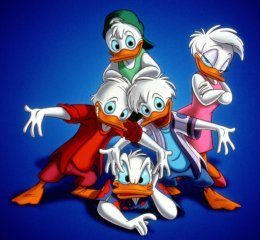 Quack Pack is a short-lived 1996 Disney afternoon show featuring Donald Duck, his now-grown nephews, Huey, Dewey, and Louie, and his girlfriend Daisy. The three nephews are now portrayed as teenagers, and much less interchangeable than in previous depictions: as might be expected by the rules of Chromatic Arrangement, Huey is depicted as the leader, Dewey is depicted as the tech-whiz, and Louie is depicted as a bit of a nerd as well as the jock-type.
Advertisement:

Seemed almost designed to inspire cries of They Changed It, Now It Sucks! from Disney purists, fans of the earlier DuckTales (1987), and fans of the classic comics, the inhabitants of Duckburg are now (save Donald, Daisy and the nephews) largely human, the nephews speak with still duck-like voices, but far less "Donald Duck" speech (as opposed to the really "Donald Duck in a higher pitch" voices of DuckTales (1987)), the costumes have been redesigned to be Totally Radical (and to include pants), and Daisy and Donald now work as a reporter and cameraman for a TV show entitled What in the World. Save for the occasional visit by Ludwig Von Drake (and in one episode, a cameo by Pluto), no other character of the Duck Universe appears. Some fans argue that the producers intentionally filled the world with humans in order to separate the show's universe from that of DuckTales (1987) and Darkwing Duck, which did not share Quack Pack's over-the-top wacky tone.

As the show focuses on Donald and Co., rather than Scrooge, the tone is a bit more slapstick in nature, though the stories presented are generally of the Carl Barks and Don Rosa-type adventures the characters are known for (and, of course, a good dash of Disney Nightmare Fuel).

Lasted for a single season of 39 episodes, most of which weren't seen until the show was rebroadcast on Toon Disney. Apparently has fallen into Canon Discontinuity, as depictions of Huey, Dewey and Louie have reverted to their classic form in future Disney productions (unlike the aging of Max Goof). However, the teen depictions of the trio from this series did make a cameo in the short comic story "Whatever Happened to Uncle Scrooge?", and they were also used in House of Mouse.

The third season of DuckTales (2017) featured an homage to Quack Pack, with an episode featuring versions of the Quack Pack era triplets and Donald alongside Webby Vanderquack, Scrooge McDuck, and Mrs. Beakley (the three of whom weren't transplanted to the original show), and Della Duck (who hadn't appeared in any cartoon at the time Quack Pack aired).

Never give a prepubescent teenage boy mind-control powers, or THIS could happen.

Never give a prepubescent teenage boy mind-control powers, or THIS could happen.