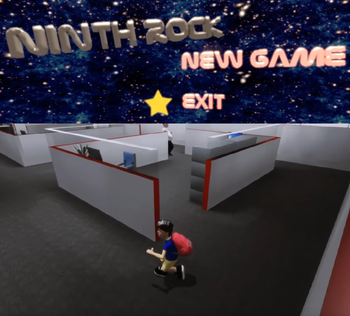 Ninth Rock is a third-person Platformer created in the fall of 2011 by a team of five game design students from the University of Houston with help from TimeGate Studios (of Section 8 fame and Aliens: Colonial Marines infamy).
Advertisement:

Spencer, a young astronomy nerd, has just learned that Pluto has been demoted to dwarf planet status due to its small size. Since it was his favorite planet, he's more than a little upset and sets out to infiltrate MASA to give the planet a little more mass.

Has a playthrough video

, which beats the game in 22 minutes. As of now, that video and this very page are some of the only proofs on the internet that this game has ever existed.