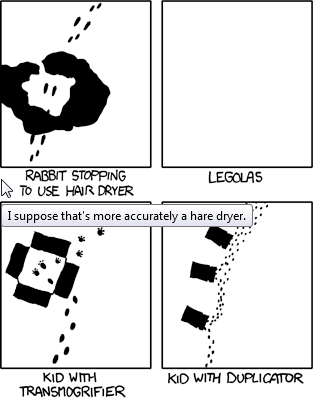 "The task of producing a cpr-themed cover version is left up to you, gentle readers, talented readers, readers who have discovered that if you hover your mouse over comics on the internet, sometimes they tell you to do stuff."
— Dinosaur Comics March 11th, 2009

Text that shows up as a tooltip when you hover the mouse cursor over an image — or other elements on a page, even text — also known (more accurately) as "title text". Alt text has many uses; some Webcomics use it to display comments, credits, or additional punchlines. TV Tropes does have Alt Text capabilities, in the forms of the Pot Hole and Spoilers.

Finishing a lengthy Archive Binge, only to find out you missed all the funny alt text, is something that hopefully will never happen to you.

Alt text is inserted by defining the "title=" attribute of the image in the webpage's html or xhtml document. The actual "alt=" attribute has other purposes,

though older versions of Internet Explorer would still display it as a tooltip, leading many authors to create alt text only functional in it.