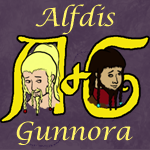 Alfdis & Gunnora is a grayscale webcomic hosted on ComicFury. It revolves around the burgeoning romance between two bearded women dwarves. Lady Alfdis is a noble – but Gunnora is a mere soldier. Although stupidly in love, they have never actually met.
Advertisement:

The webcomic ran for twelve chapters but went on indefinite hiatus in December 2018 due to the author getting "sick of the story." You can read it here

Alfdis and Gunnora contains examples of: