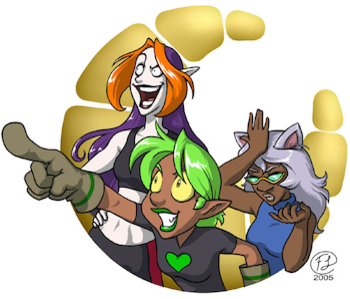 is a webcomic by Félix Lavallée (aka Falingard), which started in 2005 and is ongoing, with updates every Friday. It's a Low Fantasy Sitcom featuring the (mis)adventures of three college roommates, who have to deal with landlord dragons, vindictive halfling mages, impossibly large dungeons, and a whole host of other Dungeons & Dragons-esque characters and situations.

The three main characters are: