Webcomic / We Are The Wyrecats 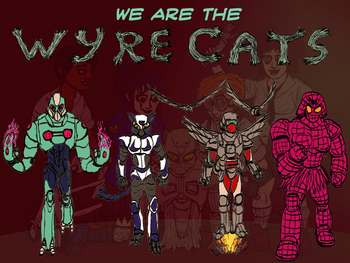 The armor keeps me steady
The head sees my future
The legs move me forward
The arms build my world
The spirit shares my future
Because we are ALL Wyrecats!
Advertisement:

Technology has become a battleground. The armory of humanity has traded an arsenal of guns and drones for advanced one-man combat equipment known as XAG (eXoskeletal Augmentation Gear) armor. In the midst of this unstable world, a team of young, idealistic special needs students decides to join the fray with their own custom XAG armor in hopes of using their skills and superior technology to calm the advancing storm.

Five years later, things have only gotten worse and there’s so much lost time to make up for.

is the spiritual successor to Ruby Nation and takes place in the future of the same universe.

Examples of tropes in this webcomic: