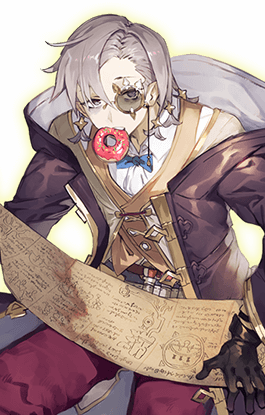 Pink frosted donuts, the ideal snack to have while deciphering ancient scrolls.
"Put in as much sugar as you possibly can... I'm about to use my brain, so I need all the sugar I can get."
— Kokonoe ordering coffee, BlazBlue: Continuum Shift EXTEND
Advertisement:

Thinking requires energy, right? Some characters do more thinking than others. These characters will need to have a quick pick-me-up on hand, and most decide to eat some sweets. Perhaps the origin of this trope is the idea that showing a character eating sweets is a way to give the viewer clues as to their hyperactive nature, and it is harder to show the genius's mental hyperactivity on-screen than another character's physical hyperactivity. Geniuses on TV also tend toward the socially immature and the eccentric, and showing them eating candy may be a clue to this. Even if a genius character isn't constantly bingeing on sweets, if they have a Trademark Favorite Food, it is likely to be sweet in flavor.

This is actually Truth in Television. The brain uses glucose as its primary source of energy

, with half the sugar you consume going straight to that organ; as such, anyone doing a task that requires a lot of mental energy (genius-level IQ or not) will inevitably start craving something sweet to eat, be it candy, baked goods, or even some fruit.

Contrast Is It Something You Eat?, where a character reveals their love of food, and their idiocy. Compare Must Have Caffeine, which often overlaps. See also Cast from Calories and Donut Mess with a Cop.