Western Animation / Voyage to Next 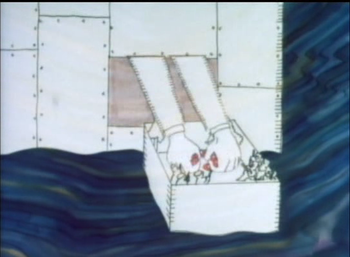 Voyage to Next is a 1974 animated short film (nine minutes) written and directed by the husband-and-wife team of John and Faith Hubley.

Father Time and Mother Earth (the former being voiced by Dizzy Gillespie) are living somewhere up in the cosmos. Father notices Mother sending boxes out on a cosmic sea and asks what she's doing; she answers that she has created humans. Things go well at first, as cavemen humans sit around campfires and share meat. But as humanity advances it gets more aggressive and violent, and Mother wonders if the race will survive.

Dizzy Gillespie's second turn as a voice in a Hubley and Hubley short, having previously appeared in The Hole.