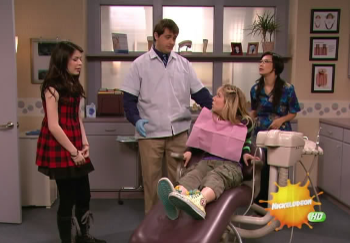 I had to go to the dentist.
I had to go today,
But don't you worry (worry);
Everything is okay.
I had to have a tooth pulled,
So they gave me a shot.
Soon my mouth will be working fine, but right now it's not.
— Songdrops, "The Dentist Song"
Advertisement:

An episode format where a character has to visit the dentist. The most common reason for this is having a cavity or a broken tooth, although sometimes they are just on a checkup. This trope is especially common in children's media. Usually a child character will get a cavity but be terrified of dentists, however they will learn that dentists aren't as scary as they thought and will probably learn about proper dental care. The child character may also have a loose tooth, resulting in this overlapping with a Loose Tooth Episode.

Compare to The Tonsillitis Episode, which is very similar. Like its sister trope, this trope is less apparent than it used to be however it will still appear. Sometimes overlaps with Sick Episode. Can also overlap with DIY Dentistry if the patient attempted to pull the tooth out before going to the dentist.

Mr. Nervous is so shaky because he knows he's next.

Mr. Nervous is so shaky because he knows he's next.