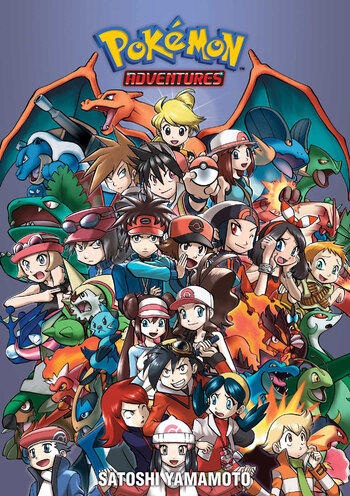 The manga series is authored by Hidenori Kusaka. It was illustrated by Mato for the first 9 volumes, and since volume 10, has been illustrated by Satoshi Yamamoto. It is published by Shōgakukan under the Ladybird Comics Special imprint. In the United States, Viz Media released only the first two chapters (corresponding to the Generation I games) originally, though they have started publishing the series again starting with reprints of Gen I and continuing from there (albeit with some quirks, such as skipping Gen III entirely for some time). While Viz played catch-up, the closest official English translation for the missing chapters was the Singaporean version by Chuang Yi Comics, which translated the series up through Volume 41. After Chuang Yi went bust in early 2014, a subsidiary of Shōgakukan called Shōgakukan Asia has continued from where Chuang Yi left off.

While there are multiple other Pokémon manga, this is the most well known due to being one of the few that was released outside of Japan and its status as a Long Runner. If you see or hear a Pokémon fan talk about "the manga", this is probably what they are referring to. (Some of the other manga are listed here.)

Note: The characters named Blue and Green had their names switched in translation so the boys' names matched the English games (in Japan, Green's the boy and Blue's the girl; outside Japan, Blue's the boy and Green's the girl.) This wiki's policy is to use the English names, but examples on other pages may see mixing of Blue/Green for the boy and the girl due to the wide use of both names for each character in the fandom. If you see any examples using the Japanese names, please change them to the English ones.