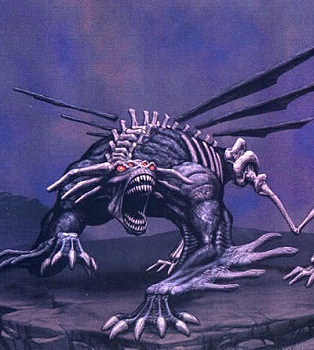 An undead demon. Great.
"The dolphin is also a zombie."
— The Suburban Almanac, Plants vs. Zombies
Advertisement:

This trope, on the other hand, is about those whose life started out "fantastic" even before they joined the ranks of the dead. Whether they were an Elf, a Dragon, a Demon, or even something completely divorced from reality, the one thing common among them is that they're all dead (or at least resemble some combination of some sort of traditional undead and its own base species) and still kicking. You may even see an Undead God. In that case, you should run, run as fast as you can.

See Raising the Steaks and Ghostly Animals for undead animals (where examples of such should go there instead of here). See Hybrid Monster, when two living fantasy species are combined. Contrast Hybrid Overkill Avoidance. Also, compare Mechanical Monster and Ninja Pirate Zombie Robot. The Grim Reaper and other Psychopomps can be one, depending on their origin. Dracolich is a specific subtrope when the creature turns out to have been a dragon.