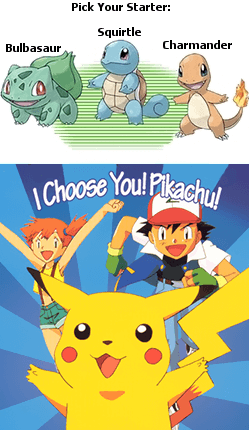 An interactive work is being adapted into another, non-interactive form — a video game into a TV series, for example. The original required the audience to choose one option above the others, such as picking a member of your Harem in a Dating Sim. As such, in the adaptation, there will be an active move by the writers not to have any choice evident, so that no portion of the audience is validated or invalidated in their choice. Sometimes comes out of an adaptation of a work with Multiple Endings.

This can also be done if it's an adaptation of a non-interactive work, by refusing to pick any one of the characters to have more spotlight or importance than the others if the audience is divided on which is best and there's no main character.

Contrast Cutting Off the Branches, which does choose one and leave the others in the dust, and Merging the Branches, which combines options in a way not possible in the original rather than creating a completely new option. Cipher Scything note either removing or minimizing the role of the Featureless Protagonist and/or Original Generationnote creating new characters wholecloth might be used in conjunction.