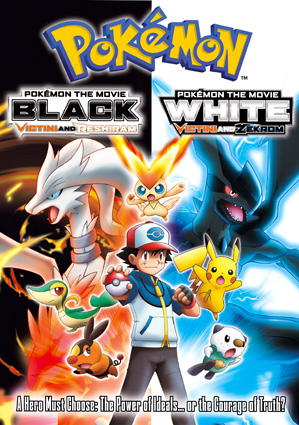 One Movie For the Price of Two
Advertisement:

Pokémon the Movie: White—Victini and Zekrom and Pokémon the Movie: Black—Victini and Reshiram (known in Japan as Victini and the Black Hero: Zekrom and Victini and the White Hero: Reshiram) are a pair of Pokémon: The Series movies that together are the 14th movie in the franchise. It follows Ash, Iris, and Cilan meeting the legendary Pokémon known as Victini at the site of an ancient kingdom. The main antagonist is Damon, a descendant of the People of the Earth who wants to restore their kingdom, and will use whatever means necessary to do so.

The White movie got a limited theatrical release in the US over the weekend of December 3, 2011; the Black movie was shown on Cartoon Network the following week.