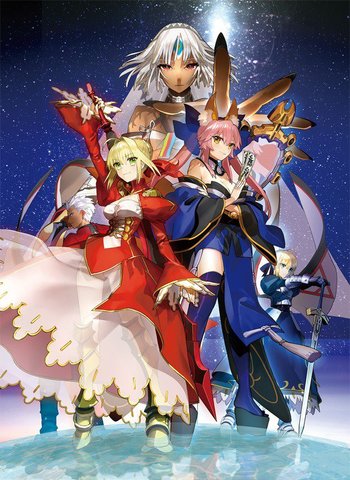 Halation star moon phase, next frontier From Fate/EXTRA
"The story of the mind between human beings is over; this is a tale between humanity and the world, in a new sea carved into the Moon."
— Kinoko Nasu
Advertisement:

Fate/Extella: The Umbral Star, known in Japan as just Fate/Extella, is a video game developed for PlayStation 4 and the Playstation Vita. It's a sequel to Fate/EXTRA and shares the setting of Fate/EXTRA and Fate/EXTRA CCC. The game is a hack-and-slash action game where the player can take control of one out of a total of 16 playable Servants.

The Moon Cell Automaton is an ancient and omniscient supercomputer whose function is to observe and record the entirety of human history. Within its limitless databanks, the records of historical and mythological figures who have become sufficiently venerated by human civilisation can be digitally recreated in the form of "Heroic Spirits", who bear the powers and armaments of their legends.

At a certain time, a great number of human "spiritron hackers" digitally uploaded their souls from Earth to the Moon Cell to take part in a "Holy Grail War": a single-elimination combat tournament where each "Master" was partnered with a Heroic Spirit "Servant", and fought alongside each other for the prize of a single wish.

The Holy Grail War is now over. The victor has been granted the Regalia which signifies their divine authority over the Moon Cell, and its endless cyberscape is reformatting itself into a new world worthy of its ruler. Yet when it is discovered that there is more than one Regalia, a new war breaks out between the competing factions looking to claim the omnipotent power of the Moon Cell as their own.

It was published by Marvelous in Japan and released in November 2016, whereas XSEED and Marvelous Europe localized and released the game in January 2017. A Nintendo Switch version was released on July 2017 for all regions and a PC version on Steam was also released the same month.

A sequel for PS4 and Vita, Fate/Extella Link, was also announced with a planned release date on June 6, 2018 for Japan and Winter 2018 for the west.

Tropes Appearing in the Game