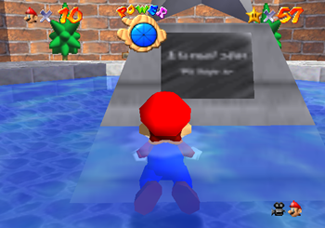 note Word of God says the sign is meaningless gibberish.
Q: What's all this about the 'ghost' characters who attack enemies in the distance? Is it true that they were programmed in to keep the number of active enemies down to a certain level?
A: We're not convinced that this exists. We certainly didn't program it in. Take your cart to a priest if you are at all worried.
— Perfect Dark developer Q&A

Every popular game has a rumor around it that is capable of turning it into a urban legend, and due to an oversight or hanging plot thread, it just seems plausible. It's not hard to believe them, since the games often have real secrets and glitches that are so bizarre that they sound made-up. But the rumor persists in spite of all the evidence against it.

A common source of these is April Fools' issues of popular gaming magazines. After all, if it's in print, it must be true! Other sources include mistranslated lines, aspects of the game being Dummied Out, and Missing Secrets. The Internet doesn't help either; while it's quick to debunk rumors, it's also very good at generating them.

Many of these rumors feature fake secrets, which can supposedly be unlocked only by pulling off some ridiculously difficult feat (or doing something very time-consuming). This, of course, makes the rumor harder to verify and contributes to its longevity.

These days, this has been becoming more and more a thing of the past, thanks to advancements in cracking physical copies of games to dump their ROMs online and allowing people to look through the game's code becoming easier and quicker with each generation. Even if no one bothers to do that, the mere existence of the internet, and the pervasiveness of fact checking it provides quickly vaporizes most rumors before they take off anyway. Even still, before internet connectivity became common and the mobile internet took off, they could sometimes gain at least some steam before the facts came out. As such, a lot of these old rumors tend to come from the the sixth generation, and tend to be increasingly more common the further back one goes.

Sometimes, the game's creators will include a character or a feature in a sequel because of these rumors. See Ascended Meme and Ascended Fanon.

Some games have so many rumors that they can result in the creation of a "FWAK", a parody/troll walkthrough containing intentionally fake "secrets". The most infamous of these is undoubtedly Eggnog's hidden character FWAK

for Final Fantasy VI. FWAK stands for "False Wisdom and Knowledge." And as a side note, that isn't his only FWAK guide either (there was also a Final Fantasy IV version, which is widely agreed to be where a widespread rumor regarding Palom and Porom originated), and just to garner the reader's trust, also contained just enough legit info for completing the games. And helping propagate things was that the guides were often mistaken for ones by a very prolific writer from the same era named Mynock

Compare Wild Mass Guessing, Viewer Name Confusion, and Fandom-Enraging Misconception. If the rumor is about something a creator allegedly said in an interview or fluff, see God Never Said That. If a rumor is video game related but not gameplay related, see Pop Culture Urban Legends. For more information, check out Pop Fiction

, an excellent MythBusters-type show on this very subject, or Did You Know Gaming?

Please do not confuse this for an Urban Fantasy edition of The Legend of Zelda. Even if it's

an urban legend itself

open/close all folders
Action-Adventure/Action/Adventure
Beat 'em Up/Fighting
Fighting games are especially susceptible to this sort of thing, because many have Loads and Loads of Characters to make up their fighting roster, and people like to speculate who might be a Secret Character.
Collectible Card Games
Driving Game
First-Person/Third-Person Shooter
Hack and Slash
Magazines
MMORPGs
MMORPGs tend to develop a ton of rumors due to their fluid and ever-changing nature.
Platform Game
Puzzle Game
Real-Time Strategy
Rhythm Game
Shoot 'em Up
Simulation Games
Sports Game
Stealth-Based Games
Survival Horror
Turn-Based Strategy
Visual Novels
Hardware
Pinball