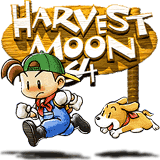 "The farm's pretty run down. You've got your work cut out, but don't get discouraged!"
— The Mayor
Advertisement:

Harvest Moon 64 is the third game in the Harvest Moon (now known as the Story of Seasons) series, released in 1999 for the Nintendo 64. An Even Better Sequel to the original, it cemented the franchise as a successful (and profitable) Cult Classic. Harvest Moon 64 sticks to the series formula — indeed, helped codify it — and generally expands on original concept. The player's grandfather has recently died and the player has decided to move in and work the farm in grandpa's place. You have just over two years (until the end of the third Spring) to whip the farm into shape, become an active part of the local community, woo, wed, and bed a local bachelorette, and generally become a successful and responsible adult. At the end of this period, your father visits and grades your progress, marking the conclusion of the game as such, though there's nothing to keep you from playing indefinitely after that.

HM64 is, like the rest of the series, a Simulation Game that combines aspects of business, social, and space management games into a single whole. It holds something of an odd place in the franchise — while it helped solidify much of the series' gameplay, it still suffers from quite a bit of Early Installment Weirdness and much of its content was ignored or altered for later Harvest Moon games. It's generally regarded as one of the best games in the franchise, but due to its age relatively few current fans have played it. It didn't help that Harvest Moon: Back to Nature (released at about the same time) had a different set of characters which took precedence over the HM64 versions for quite some time, leaving them in something of a Canon Discontinuity limbo. However, new entries in the franchise eventually reintroduced some long-missing characters (such as Elli appearing in Tree of Tranquility), so that part of HM64's history seems to be over.

Despite a claim by Natsume (the game's North American publisher) that the game was too difficult to emulate properly and would probably never see the light of day on the Virtual Console, both North America and Europe received Harvest Moon 64 as an available download on the Wii U in late February of 2017, as part of a planned year-long celebration of the Harvest Moon franchise.