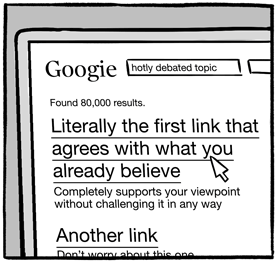 Woman: Vaccines cause autism.
Google: Well, I have one million results that say they don't... and one result that says they do.
Woman: [picks the latter result] I knew it!
Google: [screaming] Just because I have it doesn't mean it's TRUE!
— If Google Was A Guy (Part 3)

Confirmation Bias is the fallacy of lending extra weight to information and arguments that confirm your own beliefs while disregarding or downplaying evidence that disputes them. This bias comes in several forms:

In fandom, the first of these three types of Confirmation Bias is the most common whenever any media product follows a distinct philosophical, political, or religious slant. People who agree will often laud it despite its flaws, while people who disagree will often lambast it regardless of its merits.

Having this type of Confirmation Bias doesn't mean the audience is unreasonable, even though they might not like your particular work. A work supporting principles contradicting the audience's ethical or moral code might make them unable to respond favorably no matter how well-written it is. A book advocating the genocide of one ethnic group won't find many supporters among that group… or the majority of people who value human life in general. The viewpoint of the work may be so detestable to a specific audience that the message may be more important to that audience than the beauty of the cinematography or brilliance of the acting. A work displaying a crucial message to the audience might make them forgive its flaws in favor of the ideals, like how people who believe in pacifism and universal compassion will likely like a film about the importance of peace and love more. However, people are usually more objectively critical of the content of media they agree with, as they don't have anything to object to ethically. When criticizing a work whose message they despise, the ideology might completely overshadow the style, ironically making their problems with the content less noticeable.

However, many people neither agree nor disagree with a message before hearing an argument they find convincing. Many examples here are, at least a small part, meant to convince the undecided rather than change someone's mind.

Even if a work isn't for converting ideological outsiders, the creator could still have designed it to settle disputes within their group.

This phenomenon isn't limited to positive beliefs, as people can be just as prone to only accepting evidence against a position they hate.

This trope doesn't mean everyone with a given viewpoint will like something because it follows that view. Some may criticize it for not doing a good enough job persuading the undecided or those with the opposite view. Contrast Don't Shoot the Message, which is about disliking a work because of its style even if one may agree with its message.

Compare the related fallacies No True Scotsman, Hitler Ate Sugar, and Moving the Goalposts. A form of Selective Obliviousness; see also Opinion Myopia. Taken to extremes, this way of thinking will result in a Captain Oblivious.