Film / Rock: It's Your Decision 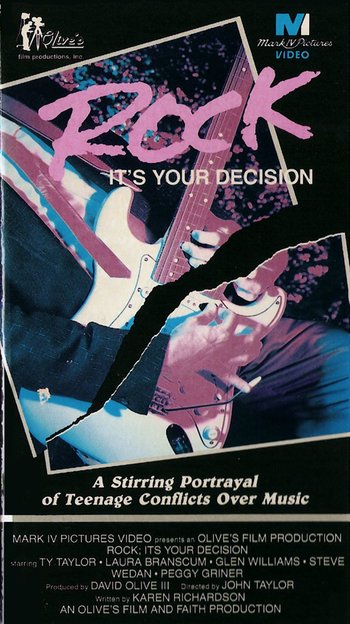 "This is a movie about a kid whose love for music is transmorphed into something quote-unquote evil by his paranoid parents until he is turned into a raving, bigoted fanatic who loses his friends, his personality, and any sense of independence. You can make your point without writing off an entire genre of music as a tool of devil-worshipping, drug abusing homosexuals; that makes you sound fucking crazy, especially when your examples are debunked."
— Brad Jones, reviewing the movie on DVD-R Hell.
Advertisement:

Rock: It's Your Decision is a 1982 Christian film about the evils of rock music.

The film centers on Jeff Sims, a teenager who is put under a bet by a preacher to give up rock music for two weeks, and research whether or not it's good for him as a Christian. Jeff takes him up on it, and soon ends up alienating everyone in sight as he becomes increasingly against rock and roll.

Trope: It's Your Decision: