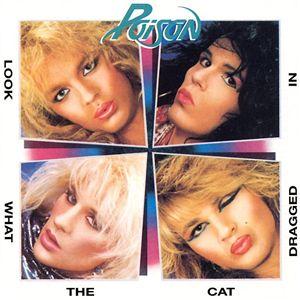 Sticks, Tricks and Lipstick Fix. Clockwise from top left: Bret, Bobby, Rikki, C.C.
They say I spend my money on women and wine,
But I couldn't tell you where I spent last night.
I'm really sorry about the shape I'm in,
I just like my fun every now and then.
"Nothin' But A Good Time"
Advertisement:

An American Hard Rock group, Poison was formed in Pennsylvania in The '80s by Bret Michaels (lead vocals, rhythm guitar), Bobby Dall (bass guitar) and Rikki Rockett (drums) before relocating to Los Angeles, where they were joined by C.C. DeVille (lead guitar) and quickly established themselves as one of the most popular bands in the Hair Metal scene.

Their greatest success was the album Open Up and Say... Ahh!, which included the number one hit "Every Rose Has Its Thorn" and peaked at number two on the Billboard charts, held off the top spot by either Appetite for Destruction, New Jersey and Hysteria. While their next album (Flesh and Blood) did pretty well, they were eventually undermined by the rise of Alternative Rock, intra-band tensions and unsuccessful attempts to adjust their style to changing trends within rock music.

For many listeners, Poison is the group that embodies the late eighties glam scene. They were famed for their hard-partying lifestyle and their seemingly endless bickering with one another. Still a popular live draw, like several other hair bands, they enjoyed something of a renaissance once Grunge died out.

Bret Michaels has since become a VH1 reality star, and has his own series of dating shows, Rock of Love. He also won the third edition of The Celebrity Apprentice.

Trope Dirty to Me!: