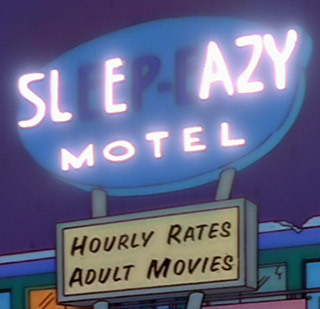 "Every night in a different place
I'll meet you tender lady
You're my no tell lover."
— Chicago, No Tell Lover
Advertisement:

Also called a "fleabag hotel" or more euphemistically as a "day-use hotel", it's the sleazy motel that rents rooms by the hour. The clerk doesn't ask what for and doesn't want to know.

The No Tell Motel is where philandering affairs and criminal deals take place. Human nature being what it is, that also makes it the site of gruesome unsolved murders. Long story short, if you have something you can drink, smoke, snort, shoot, or fuck but don't have a convenient/affordable place to carry out the activity in question at, you go here to do it.

Low-lifes on the run, prostitutes turning tricks, and the detectives who want to talk to them, will all end up here sooner or later.

See also Smithical Marriage, and Love Hotels for Japan's more glamorous (or cleaner, at least) equivalent. Detectives usually end up here by Going by the Matchbook. May also be a Hell Hotel.