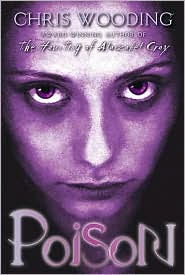 Real life is a story, too, only much more complicated.
Advertisement:

A dark young adult fantasy novel by Chris Wooding, author of the Broken Sky series and The Haunting of Alaizabel Cray. It revolves around Poison, a restless and cynic young girl living in the dismal swamps of Gull. While she doesn't fit in with the other children or get along with her new stepmother, at least she has her little sister, Azalea...at least until The Fair Folk spirit the baby away on Poison's birthday, leaving a changeling in its place. With the help of an eccentric old storyteller, Poison leaves both her home and the mortal world in a quest to rescue Azalea from the Phaerie Lord, making allies and enemies along the way.

Of course, that isn't even the half of it. Upon arriving in the world of the Phaeries, Poison finds herself embroiled in a conspiracy concerning the fate of both realms - one in which she has a much bigger role to play...