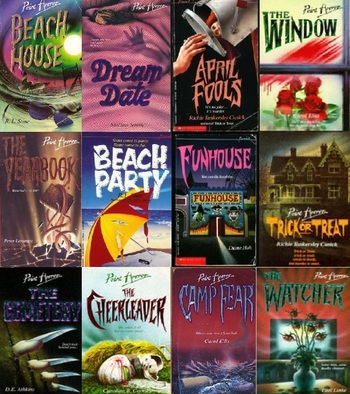 Point Horror was a long-running line of horror novels published from 1986 until 2005, similar to the likes of Goosebumps (it was where their author, R. L. Stine, got his start) but aimed at a slightly older teenage/young adult audience. It was an imprint of Scholastic, the American publisher of numerous young adult and children's books as well as educational materials. Authors that published under the Point Horror label include the aforementioned Stine, Diane Hoh, Richie Tankersley Cusick, Christopher Pike, and Caroline B Cooneynote Fans of Cooney's Losing Christina series may be interested to know that it was actually released under the Point Horror line originally..
Advertisement:

The line was briefly relaunched with new titles in 2013, though it turned out to be short-lived.

While there was once a time when Point Horror books could be found on any teen girl's bookshelf, the series died out and was largely forgotten in the Turn of the Millennium. Nowadays, they can only usually be found second-hand, either on Amazon, in car boot sales or in charity shops.

In 2019, it was announced that HBO Max is developing a series based on R.L. Stine's entries, called Point Fear