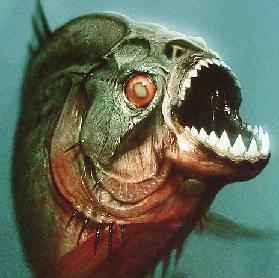 There's food in the water! GATHER THE TROOPS!
"I'm more worried about piranhas. Did you see that movie where they send a nuclear submarine to fight the piranhas, and one of them swims right down the periscope and bites the guy in the eye, and he goes, 'Aah! Aah! Aah!', and that old lady told him it would happen!?"
— Milhouse, The Simpsons
Advertisement:

It's generally agreed upon that sharks can turn most any situation from bad to worse... and then there's piranhas. Piranhas are portrayed as vicious mindless eating machines that can tear through anything and leave nothing but bones. In other words, thinking of nothing except whatever "food" happens to fall in the water.

Piranhas provide an alternative to sharks for the Shark Pool, where the villain will always walk in with a bloody dripping leg of chicken or ham, dip it in the tank for two seconds, and then remove it to show a bare bone.

In Real Life, the viciousness of a piranha school is not nearly as pronounced as media exaggerations would have you believe. When they're not hungry or are asleep, they flee from anything that disturbs them. Their famous schooling behavior is not done to attack prey, but to protect themselves from predators like caimans, giant river otters, and freshwater dolphins. Piranhas are omnivores and mostly carrion-eaters and rarely attack bigger animals, they may eat smaller animals but are in general very cautious when dealing with something that might attack back. Piranhas are also very shy and are as much afraid of humans as any other fish and would swim away if a human (or any other large animal) drops into water near them. Pet piranhas are even known to hide when humans are around, but they may bite larger animals, particularly wounded or dying ones.

Actual deaths from piranha attacks are questionable at best, but they've been known to feed on human corpses post-mortem, and they do tend to be rather bite-y fish which commonly nip at the hands and feet of waders and swimmers (being opportunistic feeders), particularly during conditions in which they have not eaten in a while. All supposed piranha "attacks" which have caused deaths are potentially dubious, as the suspected victims could have just as easily drowned before piranhas arrived to eat their bodies, which may also contribute to the myth.

Whether piranhas can reduce a body to bones, yes, it is possible, but scientists believe that it will require among 300 to 500 piranhas in 5 minutes to reduce a human body to bones, and depends on the piranhas to be starving (well fed piranhas would only take a couple of bites). While U.S. President Theodore Roosevelt did once observe Amazon piranhas reduce a cow to a skeleton in a few minutes, this occurred under artificial conditions. The locals had blocked off this portion of the tributary with nets, dumped hordes of extra piranhas in there, and starved them for days before throwing the cow in, all in the name of making a spectacle for the visiting president. Dropping the cow into a pit full of starving humans would have had a similar result, as anybody who's seen a zombie movie could tell you.

That said, we do not advocate jumping into hungry piranha-inhabited waters just because we've told you they haven't been known to kill people. They have sharp teeth and you still might lose some fingers or toes (which has been confirmed to happen).

Not to be confused with piranha solution,

a very, very dangerous Real Life chemical cocktail that can scrub nearly anything organic off of a surface (which is named after this trope).

During the Amazon Audition scene, five capybaras get eaten by piranhas.

During the Amazon Audition scene, five capybaras get eaten by piranhas.