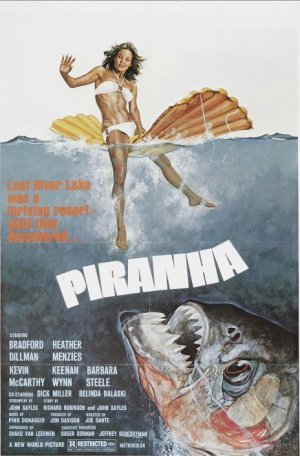 Piranha is a 1978 B comedy-horror film, directed by Joe Dante and written by director-to-be John Sayles, about a swarm of genetically-engineered killer piranhas.

Two teens break into an abandoned facility to engage in a spot of Skinny Dipping in the reservoir, and are promptly pulled under and torn to shreds. The next day, insurance investigator Maggie McKeown (Heather Menzies) is dispatched to find them. Teaming up with local hillbilly Paul Grogan (Bradford Dillman), the two enter the facility themselves and inadvertently drain the critters engineered by resident Mad Scientist Dr. Robert Hoak (Kevin McCarthy) as part of the now-defunct Operation Razorteeth (in which they would be unleashed into the riverways of North Vietnam) into the river; wherein they make themselves en route to a nearby summer camp where Grogan's daughter is staying, and ultimately the ocean...

In many respects a parody of Jaws, Universal Studios initially threatened to sue until Steven Spielberg saw it himself and loved it. In 1981, it got itself a sequel titled Piranha Part Two: The Spawning in which the piranhas fly; this film happens to be the directorial debut of James Cameron.

The first film was rather pointlessly remade as a TV movie in 1995, most notable for starring a young Mila Kunis and for reusing footage from the original film.

A more notable 3D remake, Piranha 3D, eventually arrived in summer 2010, directed by Alexandre Aja. Shifting the action to Lake Victoria (a fictionalized version of Lake Havasu, Arizona) and ditching the Government Conspiracy set-up in favour of an equally implausible plot involving prehistoric versions of the eponymous fish, it was Bloodier and Gorier, Hotter and Sexier, and generally reveled in its own silliness. A sequel to the remake, Piranha 3DD, was released in 2012.

The original films and TV remake provide examples of: