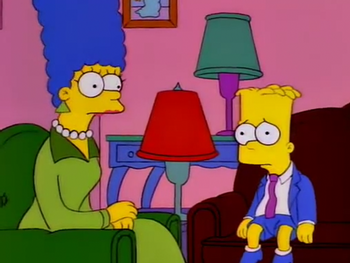 You really screwed up this time, Bart Simpson.
Advertisement:

In the second Christmas Episode, Bart gets busted for shoplifting the season's must-have video game and Marge decides to cut him out of everything the family is doing for Christmas, out of depression and the realization that he's not the little boy she loves anymore.