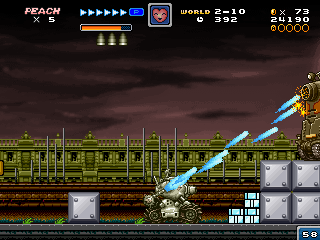 In what other game can you play as a princess in a tank?
Advertisement:

Super Mario Fusion: Revival is a sister fangame project to Mushroom Kingdom Fusion based on Hello Engine 4. This game has a stronger focus on the Mario-series style of gameplay.

The reason it has "Revival" appended to the name is because it is a revival of the idea that founder JudgeSpear once had for Mushroom Kingdom Fusion way back when it was known as Super Mario Fusion: Mushroom Kingdom Hearts. At one point in MKF's development, contact between JudgeSpear and other developers was strained, allowing it to mutate into a Mega Crossover taken Up to Eleven. Rather than force the game to be put back on track, JudgeSpear took his simple old idea of Mario visiting other dimensions and started work on a new game with it.

SMF has some crossover levels based on other game franchises, however unlike MKF it'll be kept at a minimum. The focus is Mario and company traveling to different worlds, not crossover content.

The project was officially declared dead on Jan. 2020 due to the development team moving on to commercial endeavors.

The fangame can be downloaded here.