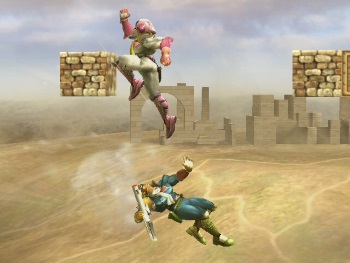 on an unwitting Captain Falcon.
"Hey! Did you just step on me?!"
— Lt. Gaia, Mobile Suit Gundam
Advertisement:

A peculiar property of Jump Physics and the Goomba Stomp, where stomping on an enemy - any enemy - lets you bounce upwards to greater height than your normal jump permits. Enemies in these games must have rubber bones or something.

Typically, to perform this technique, the player must be holding the Jump button when the character lands on the Mook. Though in some games, the player may have to do a timely button press as he lands on it or almost immediately after for this to work.

Sometimes, performing a second Goomba Stomp from one of these jumps gets you even more height.

If the game designer has a penchant for puzzles, expect there to be more than a few situations where you need to shepherd enemies to a certain unscalable cliff so you can springboard off them to reach the top. And in harder platformers such as the Donkey Kong Country series, expect to find instances where you have to chain bounce off of a string of Mooks (or maybe even a fast-moving single Mook) just to cross a sufficiently large chasm.

Compare to Cranium Ride where it's about riding on enemies, not jumping from them. One of the methods to do a Spring Jump. See Living Crashpad when a character's fall is cushioned by another character.

The Mystery Box gives a challenge where Mario has to jump off of Piranha Creepers to get the Green Star.

The Mystery Box gives a challenge where Mario has to jump off of Piranha Creepers to get the Green Star.