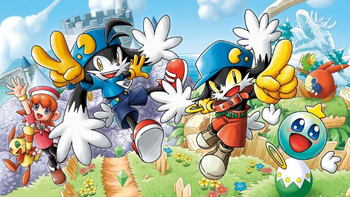 The Klonoa series comprises several 2½D Platformers starring the eponymous... creature. Exactly what he is remains undefined throughout the games' 20-year history; the only explanation being that he is a 'Dream Traveler'. That is more of a job description; Klonoa's main goal in each of the games—in which he and his abilities remain virtually the only constant—is to solve the mysteries of the dream worlds he finds himself inhabiting.

The games are, roughly in chronological order:

A remake of the original, this time for the Wii, was released in Japan in December 2008, and overseas in May 2009. Klonoa also appears in Namco Bandai's Massive Multiplayer Crossover Namco × Capcom in his Klonoa Heroes incarnation, while the character often winds up getting cameos in the Tales games (the most notable, from Tales of Symphonia, being a full costume for the Cute Bruiser, complete with deadpan "wahoo").

Out of the blue and without a warning, an animated movie announcement

came out in autumn 2016. It was to be produced by the studio Henshin, produced by Rob Pereyda, with art direction from Hiroshi Ariga, who was also writing the film. Series creator Hideo Yoshizawa was going to be an executive producer. Ash Paulsen joined as associate producer. Details on the plot were scarce, aside from it taking place in a similar universe as the games, and being a more or less original story. But despite the insistence that the project is still in the works,

it was confirmed to be cancelled on January 2019.

KLONOA Phantasy Reverie Series, a Compilation Rerelease containing remasters of both Door to Phantomile and Lunatea's Veil to celebrate the 25th anniversary of the series, was announced for the Nintendo Switch, Play Station 4 and 5, Xbox one, Xbox Series X and S, and PC, and will release on July 6, 2022.

This series has a Character Sheet, currently under construction. Please keep character tropes there.

The series as a whole contains examples of the following tropes:

Joka arrives to berate King Seadoph (who has just been freed from Joka's brainwashing) for failing to kill Klonoa and Huepow. It doesn't go very well for him.

Joka arrives to berate King Seadoph (who has just been freed from Joka's brainwashing) for failing to kill Klonoa and Huepow. It doesn't go very well for him.